Stroboscope - Motion of a wild cat

The stroboscopic effect is a visual phenomenon caused by aliasing that occurs when continuous motion is represented by a series of short or instantaneous samples. It occurs when the view of a moving object is represented by a series of short samples as distinct from a continuous view, and the moving object is in rotational or other cyclic motion at a rate close to the sampling rate. It also accounts for the "wagon-wheel effect", so-called because in video or film, spoked wheels on horse-drawn wagons sometimes appear to be turning backwards.
A strobe fountain, a stream of water droplets falling at regular intervals lit with a strobe light, is an example of the stroboscopic effect being applied to a cyclic motion that is not rotational. When viewed under normal light, this is a normal water fountain. When viewed under a strobe light with its frequency tuned to the rate at which the droplets fall, the droplets appear to be suspended in mid-air. Adjusting the strobe frequency can make the droplets seemingly move slowly up or down.

Email ThisBlogThis!Share to TwitterShare to FacebookShare to Pinterest
Labels: stroboscope

Automate your Multisim design in LabVIEW  Written by: Larsha Johnson Date: October 24th, 2021 If you like designing electronic circuits in M... 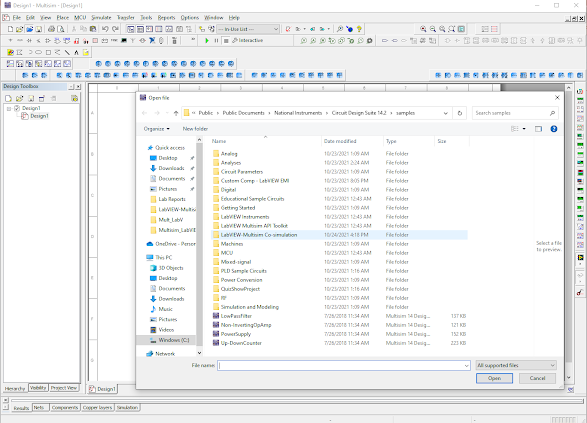